The Tobacco Control Scale 2010 in Europe

Overall countries, which failed to undertake new initiatives, lost TCS points and fell in the ranking. Countries with comprehensive policies in the six tobacco control policies are leading tobacco control in Europe.

Price policy remains the most effective way to reduce sales. Prices in Lithuania, Romania, Bulgaria and Latvia increased strongly in recent years, but only as result of obligations under the 2002/10/EC Tobacco Tax Directive. Norway has the highest cigarette prices in Europe and probably in the world: 10 euro for a pack of Marlboro in the supermarket and 12 euro in the kiosk. Ireland has the highest prices in the EU, as the UK was affected by the unfavourable currency exchange of the British Pound towards the Euro in recent years.

According to the stock analysts Morgan Stanley “Of the various measures available to governments in reducing demand for tobacco, clearly the one that concerns the cigarette companies the most is rising taxation.” (21). High price remains the most effective tobacco control measure, thus it is important to note that the price of tobacco products varies greatly in Europe. On 1 July 2010 a pack of Marlboro cigarettes ranged from €2.55 in the Baltic countries to €8.55 in Ireland and €11 in Norway.

According to Morgan Stanley again “the other two regulatory environment changes that concern the industry the most are homogenous packaging and below-the-counter sales. Both would significantly restrict the industry’s ability to promote their products.”(21)

A ban on displaying tobacco products at the point of sale exists in three European countries (Iceland, Ireland and Norway) and will be introduced in Finland in 2012. Six European countries (Belgium, Romania, UK, Latvia, Switzerland and Turkey) require pictorial warnings on cigarette packets and four will introduce them in 2011: Malta, France, Spain and Norway. The global trend is towards larger health warnings with pictures. Uruguay, for instance, has implemented legislation to make pictorial health warnings obligatory, covering 80% of the front and the back of cigarette packs. The 2001 EU Tobacco Products Directive regulates the content and labelling of tobacco products in the EU. The European Commission is exploring the merits of introducing plain packaging as part of the revision of the Directive. Last year the Australian government decided to introduce legislation to make plain packaging mandatory on all tobacco products as of 2012.

Plain packaging includes the removal of all attractive promotional aspects on tobacco product packaging. Except for the brand name (which would be presented in a standardized way) all other trademarks, logos, colour schemes and graphics would be prohibited. The package itself would be required to be plain coloured and to display only information (such as health warnings) required by law.

A number of studies on plain packaging report the same results (22,23,24):

Large (80%) picture warnings should be placed on the front and back of all tobacco products in combination with standardised/plain packaging, The pictures should be renewed on regular basis, with the aim that the whole pack would become a platform for mandatory health promotion messages.

On the basis of the research reviewed in our introduction, and our results, there are some serious shortcomings in tobacco control in Europe at the moment. There is an urgent need for more investment. In the EU only the UK spent €1 per capita per year on tobacco control. The 2004 ASPECT report recommended that EU member states immediately increase per capita spending by €1-3 (25).

Here we comment briefly on individual countries, in reverse order of their 2010 ranking (in brackets the 2007 ranking and up or down movement). 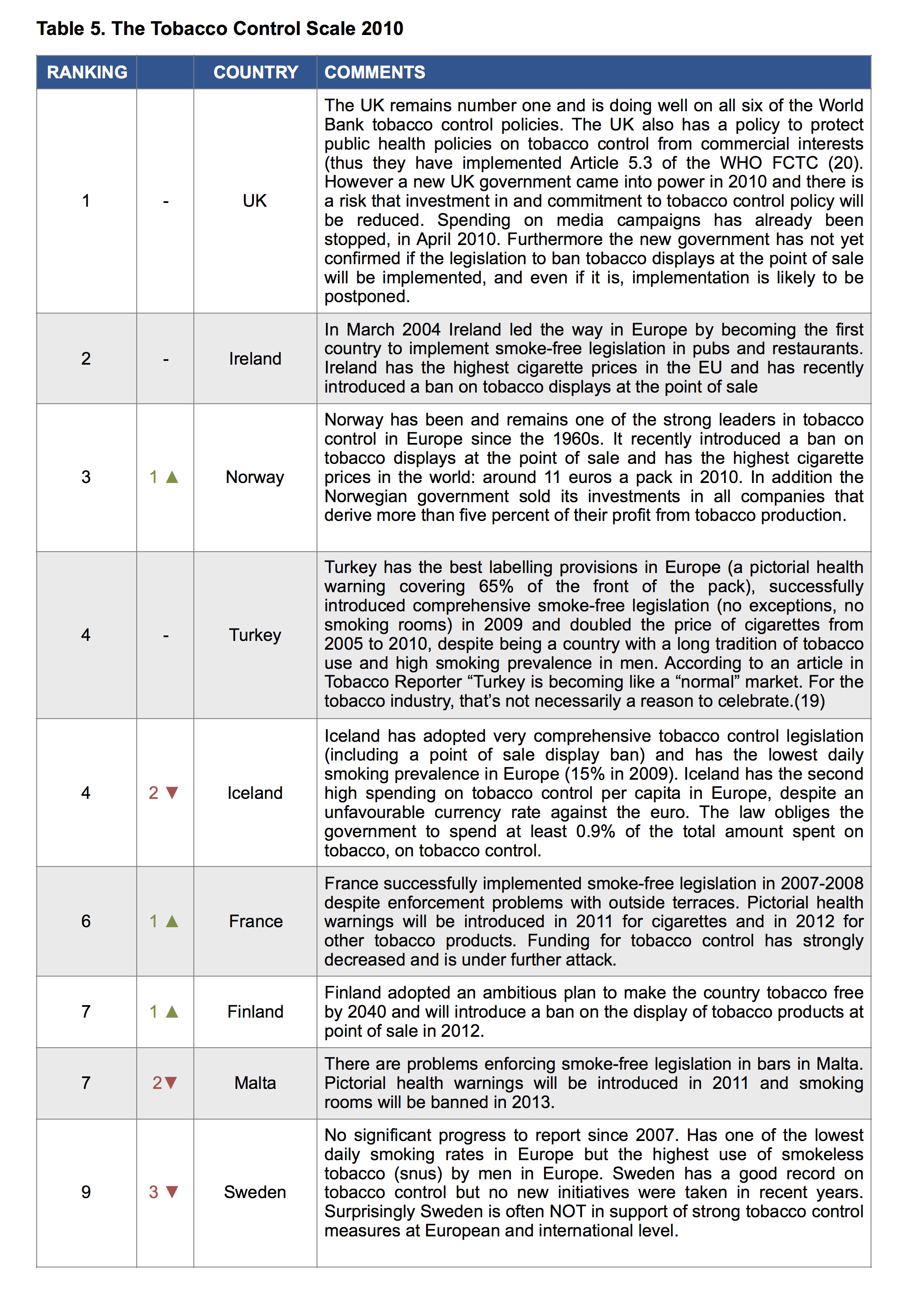 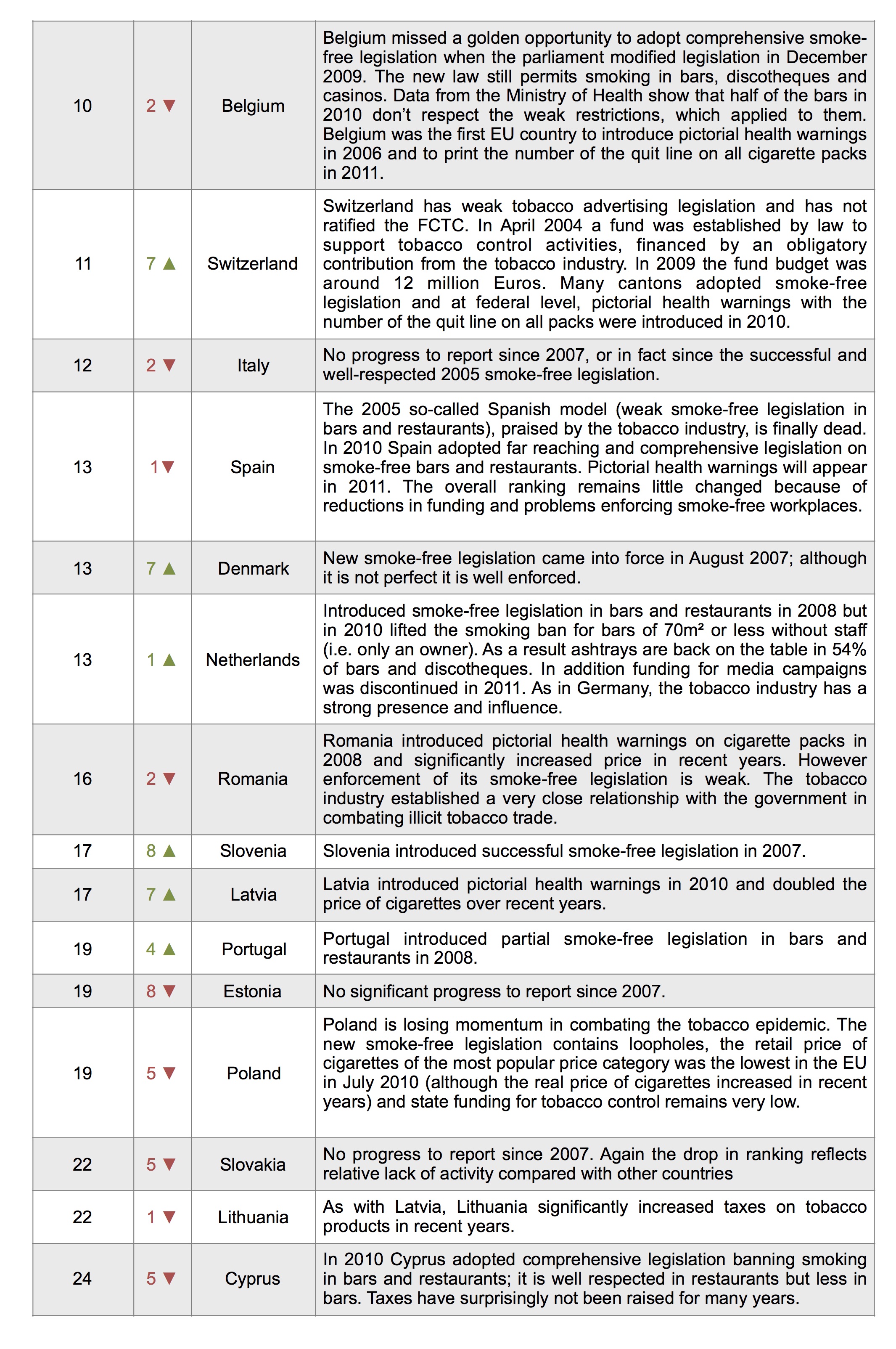 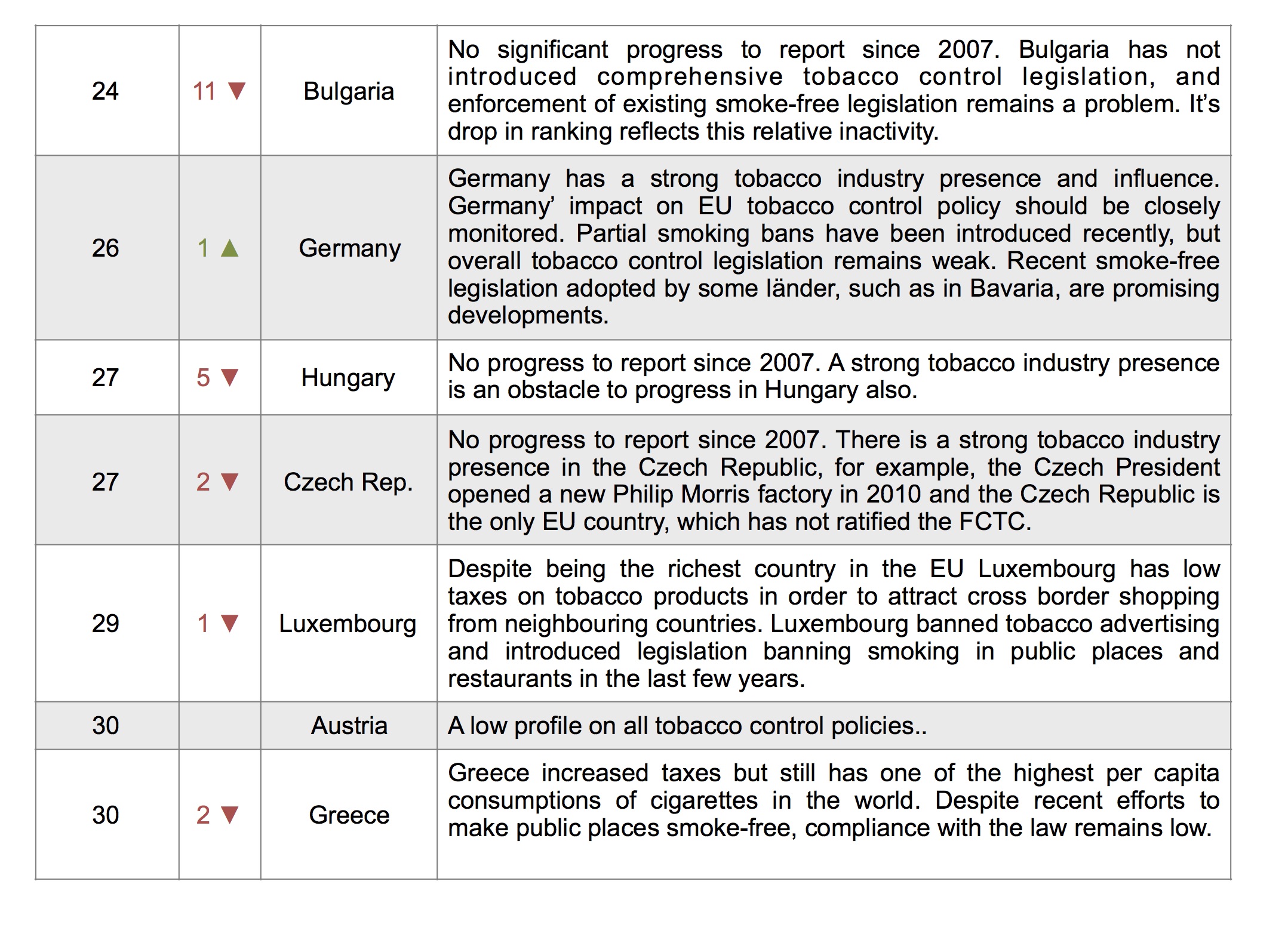